We all know about the Egyptian pyramids and the Great Pyramid of Giza. But the ancient world — as well as our more recent one — spawned many other strange pyramids, from Rome to Iran, and all the way to Mexico and Scotland. Rome might be famous for the Colosseum, but the Italian capital also houses a fabulous ancient pyramid that dates back to the Roman Empire! An enormous pyramid that still appears at its full height on the Roman skyline is thought to have been constructed between 18 and 12 BCE. The Pyramid of Cestius contains the tomb of Caius Cestius, a Roman Magistrate, and is crafted from brick and cement, with a white marble covering. The markedly out-of-place landmark is just over 118 feet tall, forming a striking interruption in Rome’s cityscape. While a fascination with Egyptian architecture and culture gripped ancient Rome for a time, it is worth noting that the Pyramid of Cestius is more steeply angled than the Egyptian pyramids. 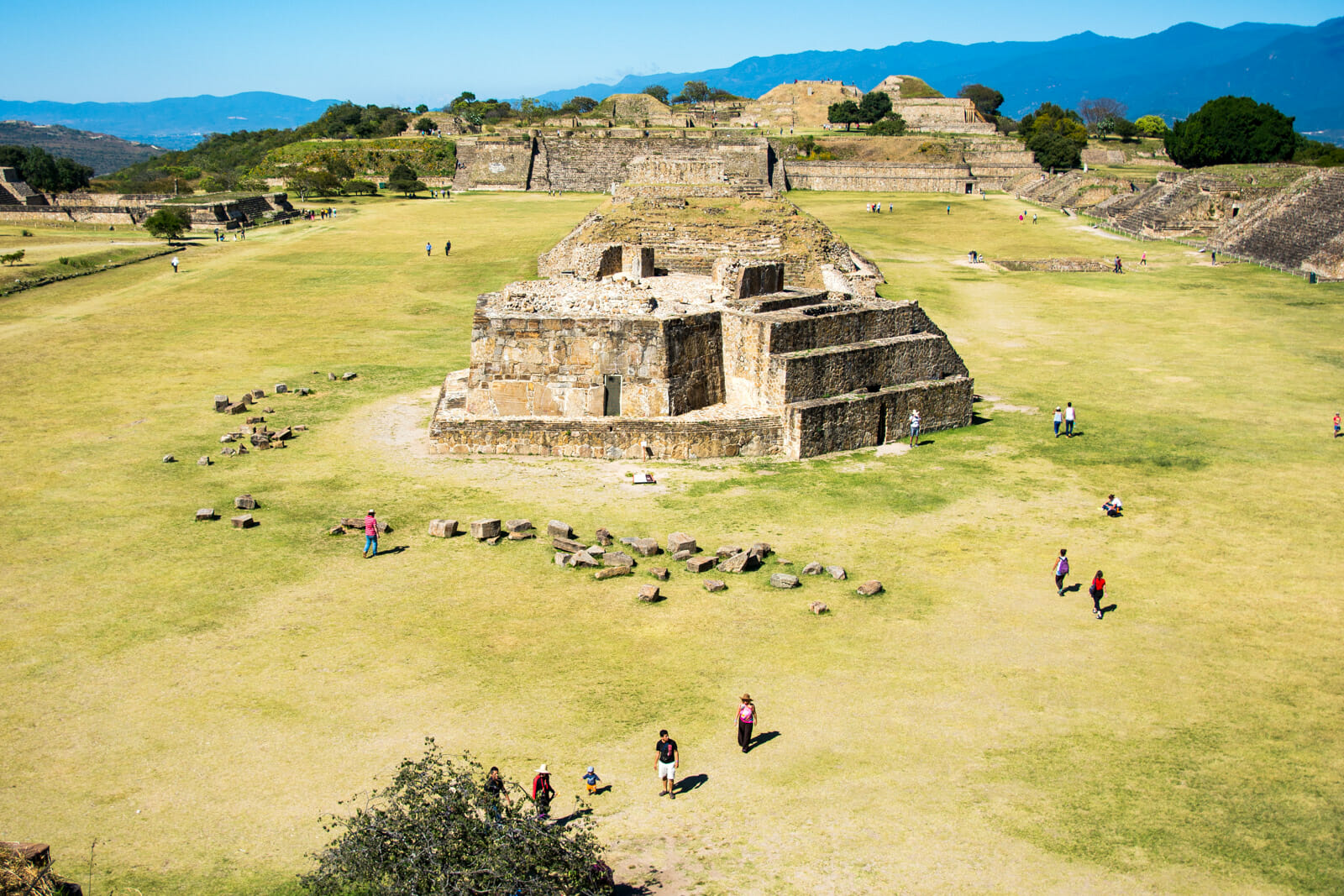 Mexico hosts some remarkable pyramids, and Monte Alban is a must-see for pyramid enthusiasts. This strikingly advanced ancient site has a combination of grassy green courtyards and incredible stepped pyramids meticulously constructed of stone, located on a high hill. The pyramids and plaza in which they stand are the work of the Zapotec culture, with construction dating back to the eighth century BCE. Ancient amenities constructed on-site range from high-status dwellings to ball game courts and religious temples. Carvings in the stones around the site depict many aspects of ancient life, including some startling depictions of what is said to be human sacrifice. 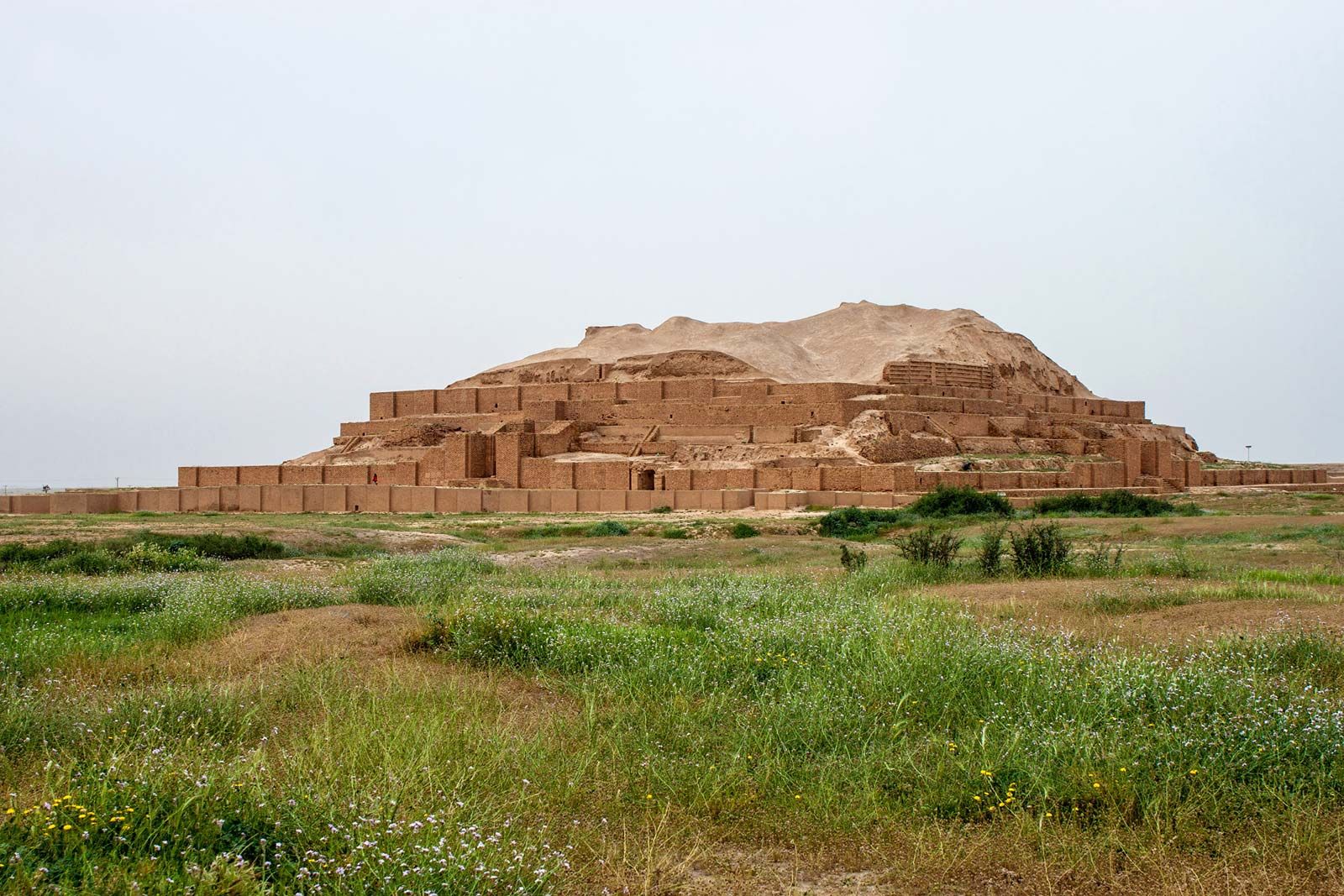 Located in Khuzestan Province, Iran, this UNESCO World Heritage Site is the main feature of a huge complex with a perimeter of just under 2.5 miles known as Tchogha Zanbil. The enormous sacred city Tchogha Zanbil was constructed under the command of King Untash-Napirisha of the Elamites (1275-1240 BCE), in the historic Kingdom of Elam. The pyramid in the center of Tchogha Zanbil is the largest and most monumental stepped pyramid not built in Mesopotamia. The ruins are a testament to a once-grand structure that was approximately 345 feet in height but has fallen to a height of just 84.5 feet. The pyramid is of a type known as a ziggurat, which is a stepped pyramid-shaped structure that reaches enormous heights and holds great traditional significance to ancient societies.  The pyramid of Tchoga Zanbil is a religious monument, honoring the Elamite deities Inshushinak and Napirisha. Despite the damage, this site is the best example of a ziggurat in the world and offers a wealth of resources to ancient anthropologists studying the Elamite culture. 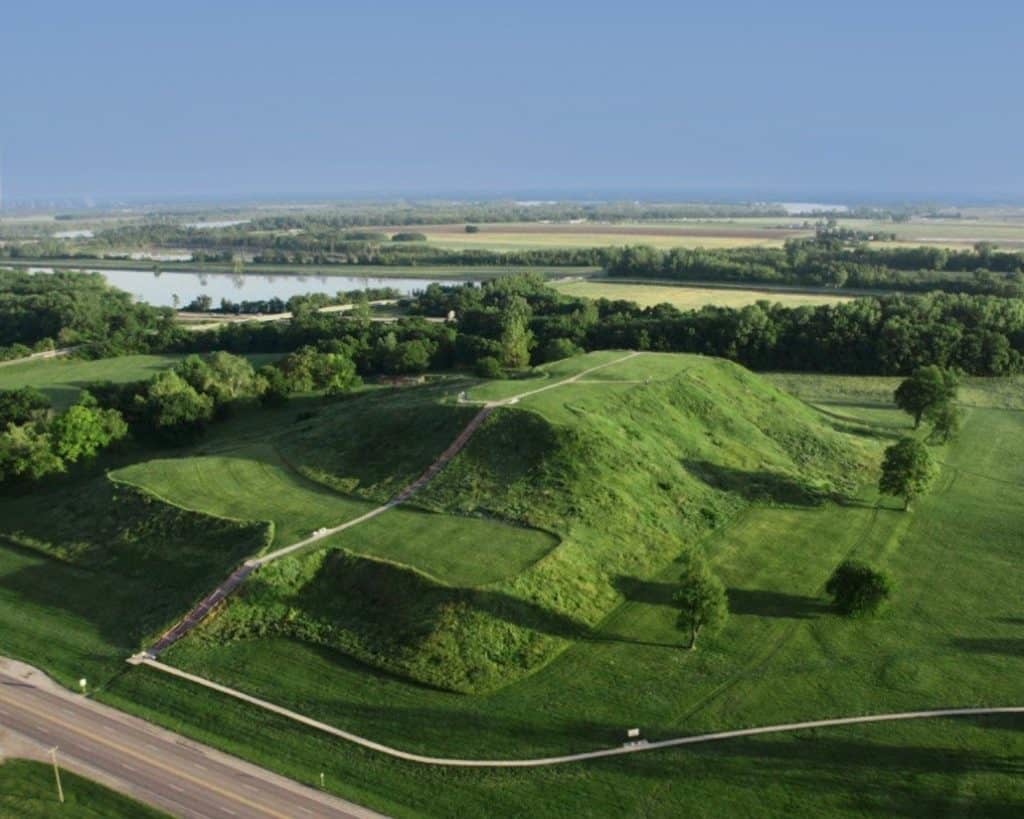 Ancient pyramids in the United States? Absolutely. The Mississippian culture left behind a historic site defined by giant earthen mounds resembling pyramids. Cahokia Mounds State Historic Site preserves the ancient relics of the Mississippian culture, structures, and associated landscapes with a variety of uses, including the burial of multitudes of bodies of people who died in human sacrifices. UNESCO identifies the Cahokia Mounds as a World Heritage Site.  In a six-square-mile area, 120 of the complex earthwork mounds were constructed. Now, 80 remain. Cahokia began to gain settlers in CE 600, with the building of the pyramid-like earth mounds starting in CE 900. 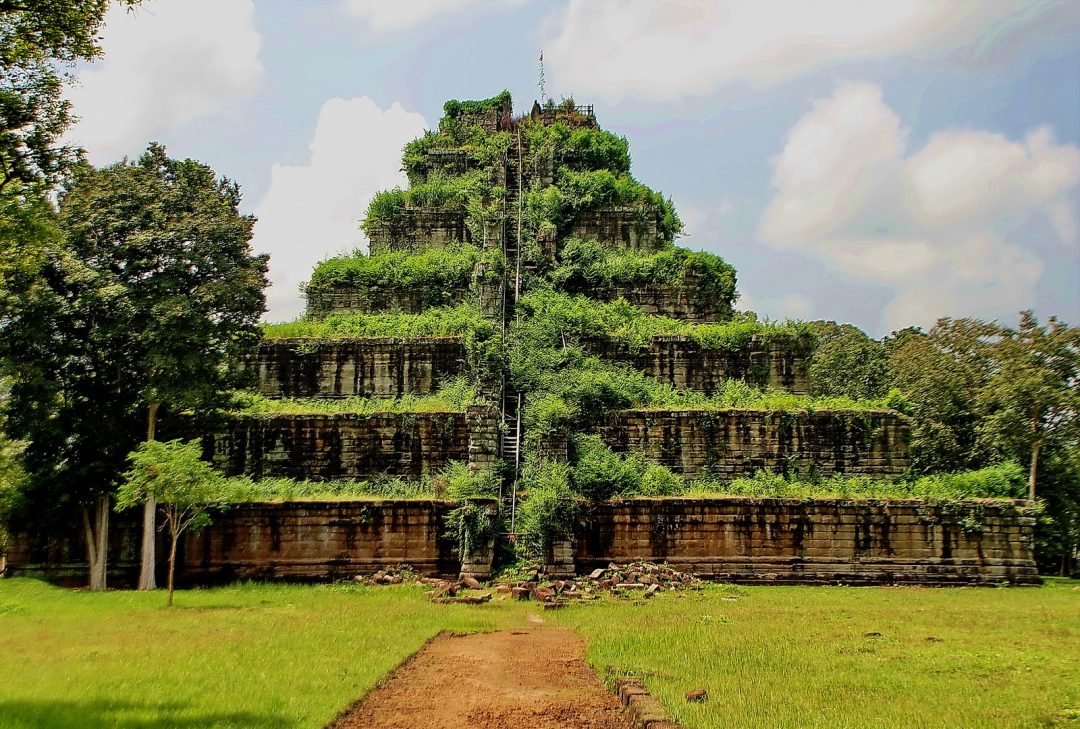 Cambodian jungles conceal a grand pyramid shrouded in mystery as much as it is covered in vines. A stark contrast to the popular association of desert landscapes with pyramids, Koh Ker is a terraced pyramid that maintains its structure via gravity, each self-weighted piece holding the building together. A thorough exploration of the pyramid is problematic, given the presence of landmines in the area, a hazard that stems from the Khmer Rouge-associated conflicts that ravaged Cambodia in fairly recent historic times. Furthermore, entrance to the structure remains a matter of speculation, though it is thought that a clandestine underground tunnel into the structure may exist. And who knows what would be found inside if such an attempt to investigate were made by someone brave — or foolish — enough to venture closer. The structure, made entirely of sandstone, has seven tiered levels, with a height of 131 feet. 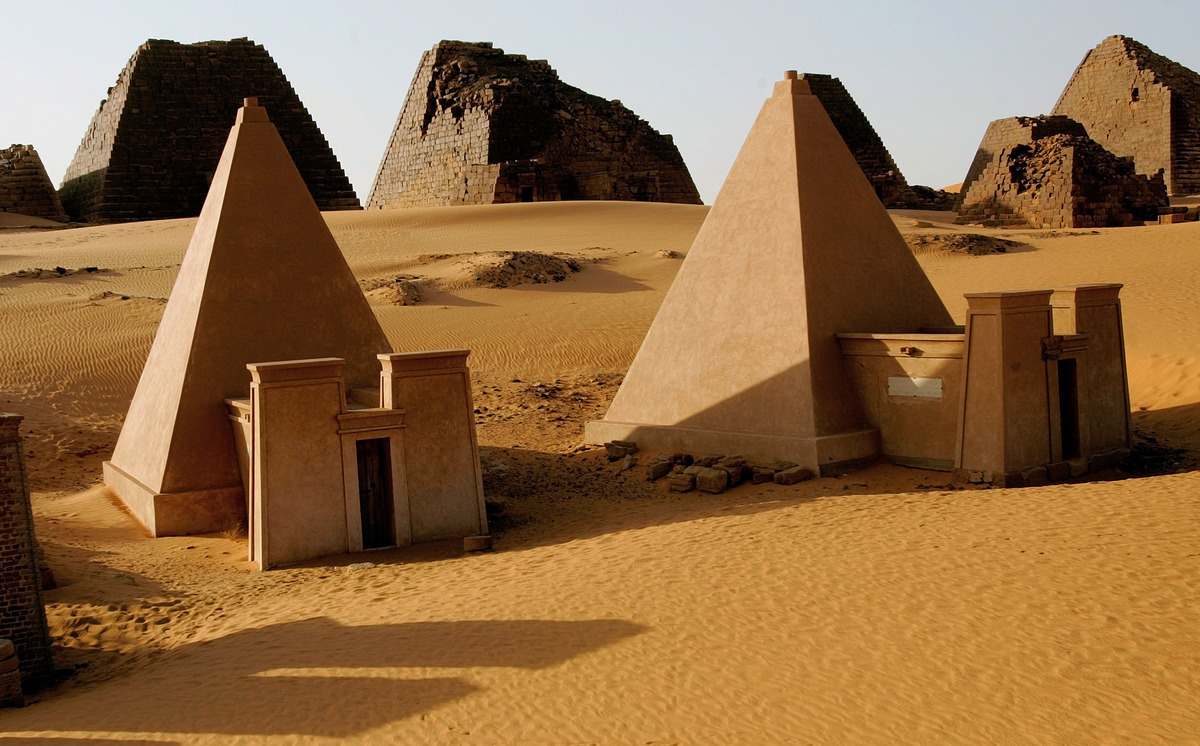 6. The Pyramids of Sudan

Egypt is not, in fact, the record-holder as the country in Africa with the most pyramids. That honor actually goes to Sudan. The northern part of the country has a rich history defined by its ancient Kushite kingdoms. Five archaeological sites in Sudan host an incredible 350 pyramids that were built over the course of several hundred years as tombs for the kings, queens, and privileged citizens of the Kushite kingdom of Napata, which has a history spanning from 1000 BCE to 300 BCE, and the Kushite kingdom of Meroë, which dates from 300 BCE to CE 300. The Sudanese pyramids measure between 20 and 98 feet tall and have foundations that are one-fifth of the typical Egyptian pyramid base area, making them seem more abrupt and pointy in appearance. Foundations tend to be 26 feet or less in width, with pyramid inclines that measure 70 degrees (compared to the gentler Egyptian pyramid incline of 40 to 50 degrees). The rising water levels in these desert pyramids required modern expeditions between 2015 and 2019 to be completed with diving gear.

7. Pyramid of the Moon

When you consider its history, the Pyramid of the Moon is one scary structure. Located in San Juan Teotihuacán, Mexico, this monster pyramid was built to resemble the mountain Cerro Gordo, which stands close to the construction area. Dating from an ancient construction time frame from AD 100 to 450, the pyramid is creepy for a couple of reasons. Firstly, the pyramid stands at the end of the Avenue of the Dead. Secondly, the staircase leading from the avenue was the spot where both animals and human beings were sacrificed in bloody religious ceremonies. Not only were victims led to their death and sacrificed at the pyramid, but the sacrifices were prerequisites for the ongoing construction of additions to the site. Every time another layer was to be built on the pyramid, the bodies of sacrificial victims were interred in the stone before the work was done, giving validity to the pyramid expansion.

8. Pyramid of the Niches

Ancient pyramids might seem like the epitome of solidness, but a bizarre pyramid in Mexico flies in the face of pyramidal normality. The huge Pyramid of the Niches is located in the archaeological location El Tajin, in the modern Mexican state of Veracruz. The pyramid is the greatest structure on-site, boasting 365 recessed “niches” that make it look like an ancient hotel or apartment building. The fact that this pyramid was adorned with exactly 365 window-like niches provided archaeologists with clear evidence that the pyramid had been constructed with close attention to the calendar year. The Pyramid of the Niches may look more fragile than the better-known pyramids of Egypt, yet the condition in which the huge structure remains in modern times speaks to the durability of the construction and the high skill of the ancient workers. Built from sandstone quarried close to the construction site, the Pyramid of the Niches is six tiers in height, measuring a total of around 60 feet. Originally, a seventh tier crowned the structure, but it was lost to history. The square base measures 118 feet on each side. A staircase goes to the top of the pyramid, climbing along one side. Relief carvings illustrate community celebrities, including priests, politicians, and even ancient sports stars. 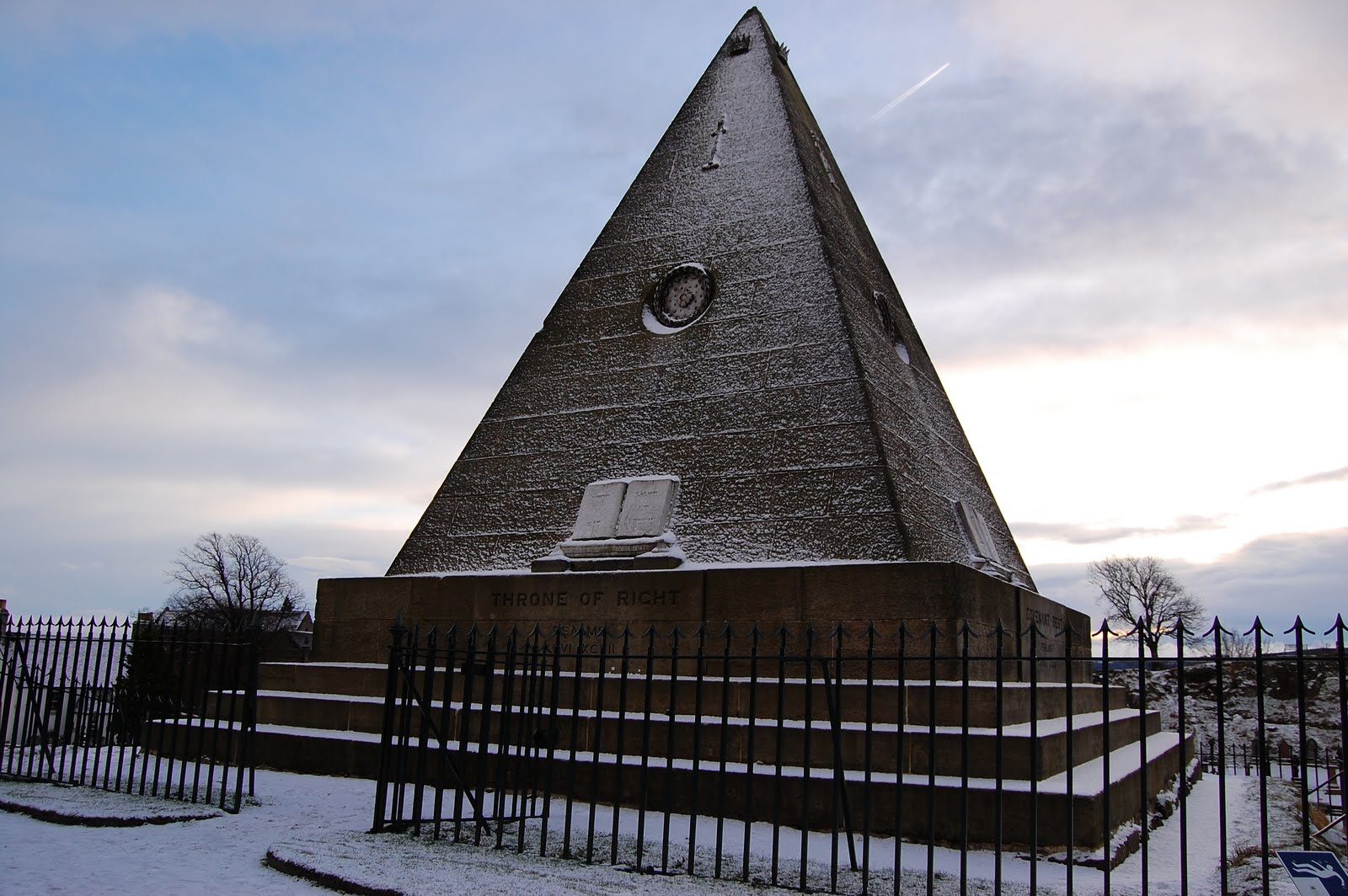 The British Isles might seem like the last place to search for mysterious pyramids. But a small park located in the space between Stirling Castle and the Valley Cemetery in Scotland contains a massive sandstone ashlar pyramid known as Star Pyramid. Evangelist William Drummond had the pyramid built on his Drummond Pleasure Ground park. Decorated with marble Bible likenesses and inscriptions from the Book of Psalms, the Star Pyramid is alternatively referred to as Salem Rock or the Covenant Monument. The construction of the pyramid was completed by William Barclay in 1863, but weathering has made the pyramid appear significantly older. The mysterious-looking pyramid is dedicated to martyrs who died in protest against restrictions on civil rights and freedom of religion in historic Scotland. Drummond himself was laid to rest in the park which holds the pyramid in a stone sarcophagus. The pyramid is notably steep, forming not only a striking landmark but also a destination for tourists and investigators who seek to read mystery into what seems to be an anomaly of world architecture, an early 19th-century Scottish pyramid. 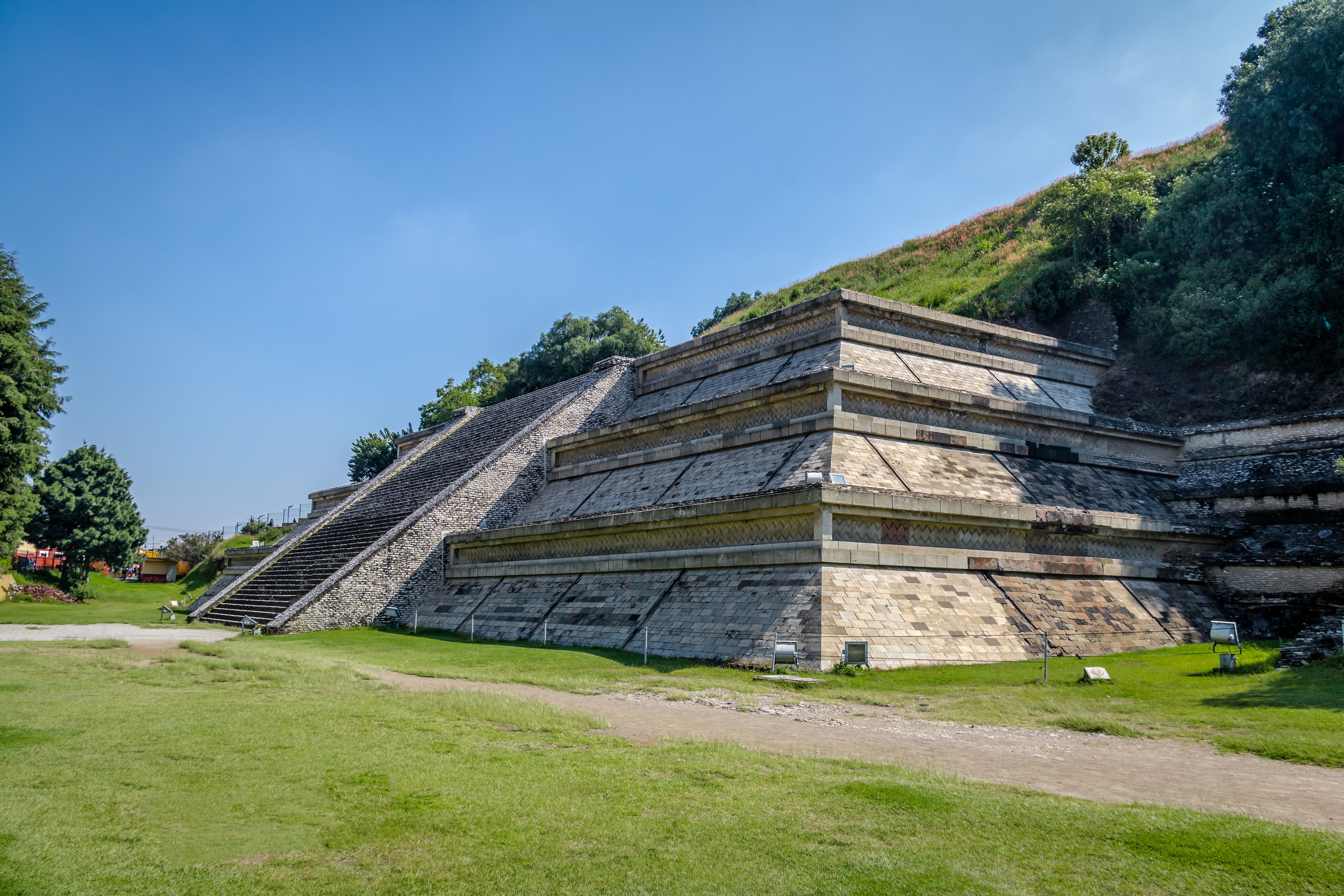 10. The Great Pyramid of Cholula

The world’s largest pyramid is not in Egypt; it is in modern-day Mexico. The mysterious-looking structure is also quite cryptic — the pyramid is huge, with gentle lines and a covering of greenery, which cause it to resemble a natural hill. A church is built on top of the pyramid, contrasting sharply with the pyramid below. Located in Cholula in Puebla, Mexico, the structure is 180 feet in height, with a footprint that measures an enormous 1,480 feet square. The Nahuatl name for the pyramid, Tlachihualtepetl, literally translates to “made-by-hand mountain,” a fitting name for the enormous structure. Built from a variety of materials including adobe bricks and stone, the pyramid was constructed in six different stages, which corresponded to different cultural groups that had a role in the pyramid’s construction. Despite the five miles of exploration tunnels that were constructed inside the pyramid starting in 1931, only three of the six pyramid’s structural elements have been explored in detail. Finds have been diverse, with a number of artifacts and human remains being discovered on-site. The pyramid originally measured 217 feet high, and dedication to the deity Quetzalcoatl is the time-honored understanding of the pyramid’s meaning. Construction of the temple-pyramid complex spanned the time from the third century BCE to the ninth century CE.