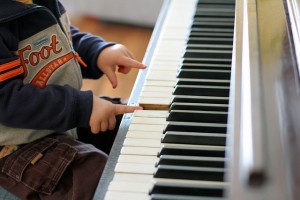 Let’s face it, toddlers aren’t always the brightest of humans. They stick their fingers into sockets, eat their own boogers and disrobe in public as often as they can.  But it’s not their fault! Their brains are busy soaking up the world around them and trying to make sense of it all. Traditional education can help immensely, but did you know that music and arts education can be vital even at their young age? Here are the 5 ways a toddler music class will make them smarter.

“More and more studies show a correlation between higher academic achievement with children who are exposed to music,” says children’s music spet Meredith LeVande of MonkeyMonkeyMusic.com. “Music simply stimulates parts of the brain that are related to reading, math, and emotional development.”

As they memorize those tiny rhymes and hand movements, they are strengthening the area of their brain for longterm memory. So if they lose a sip cup? They may begin to remember where they stashed it!  “Further research has shown that participation in music at an early age can help improve a child’s learning ability and memory by stimulating different patterns of brain development,” says Maestro Eduardo Marturet, a conductor, composer and musical director for the Miami Symphony Orchestra.

A music class can help them learn to share, take turns, to listen to their peers and understand the teacher-student dynamics. Toddlers often consider themselves the center of the universe, but exposing them to a classroom where they have to interact with other children can be beneficial later when they start school.

Unlike the ABCs, Music is part of a never ending pursuit of learning. There is no limit to their exposure to music styles, instruments, and songs. Once they master simple rhymes they can move on to complex tunes, then notes, chords, and even simple instrument instruction. Music is a lifelong journey!

It’s a great form of expression

Toddlers aren’t great at communicating. They blast in wordless tantrums for just about every emotion, even joy! Music can give an outlet for them to show their emotions when their words fail them. Assigning emotions to different styles of music allows even non-communicative older children a way to express themselves.

Finally, music leads to a well-rounded child, a child who can do more than parrot back facts, but thinks creatively about their world. Dozens of studies prove that a music class can improve older children’s performance in all subjects of school- math, science, writing, foreign language, and history. Why not start your child’s educational career right with a toddler music class?

Tracy Fisher is Growing Up in the Valley's head designer. She has been a part of the publication since March 2012. She is the proud mother of Charlotte, 6. She also eats too much chocolate.
Share This: