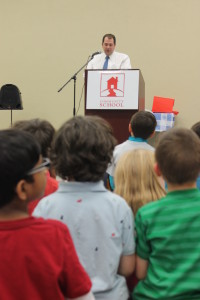 Each year, thousands flock to Elmwood Park in Downtown Roanoke for the annual Strawberry Festival. According to Pattie Stratton, however, few know about the driving force behind the event. Stratton, the Director of Marketing and Development for Community School, hopes to change that.
The small school located on Williamson Road across from Hollins University is home to 144 kindergarten through eighth grade students and Stratton emphatically stated that “It’s their festival.” The students and their families play a major role in the event, which is a fund-raiser used for scholarships, classroom expenses and the day to day running of the school. But, the event goes beyond just a fund-raiser. Parents have to donate 12 hours apiece to the festival. The students, especially the older ones, can be found behind the scenes and working at the event too. And while this may seem like a daunting task at first, Stratton explained that the Strawberry Festival helps the families understand what Community School is all about.

“They get there and have ownership of this great event and have a ball,” Stratton said. “Our children learn to be a part of the community.” 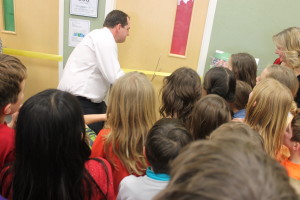 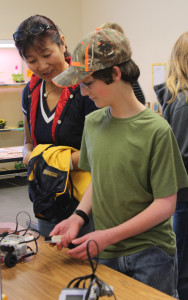 Stratton and the staff spend months preparing for the event, which this year will be held on May 2 and 3. The main feature: strawberry shortcake. A few weeks prior, volunteers meet to bake the short cakes which are then flash frozen. The Thursday before the event, the majority of the day is spent slicing the strawberries. Then, on Friday and Saturday, parent and student volunteers spend hours scooping ice cream and berries atop the cakes for the masses to enjoy. Patrons can also choose a variety of other strawberry-themed treats, ranging from slushies to chocolate- covered berries. While the strawberries have to be shipped from California, since local berries aren’t yet in season, much of the other necessities are locally donated. Homestead Creamery and Roanoke Natural Foods Co-op donate milk, United Dairy donates butter, Mennell Milling donates the flour, Hollywood’s Bakery donates baking powder and a variety of other local restaurants donate sugar. Murray Cider even donates space for their prep work. Holding true to the school’s name and philosophies, it’s a true community event. 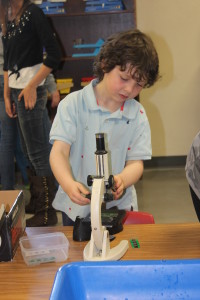 The Strawberry Festival, which is marking its 34th year, is the longest running festival in Roanoke. Stratton is especially excited this year, as it is the first event to take place at Elmwood Park since it underwent renovation. Throughout the space, aside from the berry treats, attendants will find children’s games and arts and crafts vendors. Nationwide will also sponsor a NASCAR simulator. “We are trying to figure out how to grow, for us and for the community,” Stratton said. As a result, last year they added food trucks and a rock climbing wall. Over the past couple of years they have also marketed the event in ways to make it more accessible to the public. The week before the festival, sponsors and some Downtown vendors pass out wooden nickels featuring dollar off coupons. Roanoke.com’s Daily Deal offers discounts as well. 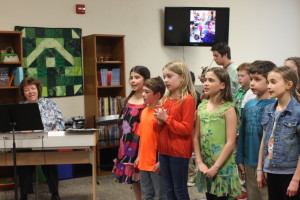 Typically patrons have to wait in line to buy tickets for the food items and then wait in another line for the food; while that is still an option, Stratton said they have started offering a variety of others. Tickets can be pre-purchased at the festival website and at all locations of their presenting sponsor, Hometown Bank. This is their first year to have a presenting sponsor for the event. “It’s such a family-oriented event and that’s what Hometown Bank wants as well. It’s a nice partnership,” Stratton said. The event will also have a substation set up in the Market Square building where people can purchase tickets and shortcakes. They may even have another substation set up on Grandin Road; Stratton promised that if not this year, that was a definite for the 2015 festival. Furthermore, those who can’t make it to the event can order shortcake kits online to make their own deserts for eight to ten people.
The Strawberry Festival has proven a successful endeavor. Ten years after the creation of Community School, parents decided to set up the fund-raiser to raise money for the school and celebrate spring. They came up with the idea of the Strawberry Festival, modeled after peach festivals they had seen. The original Strawberry Festival was held at Crestar Plaza and brought in $2,500. Last year’s event raised $59,000 for the school and drew a crowd of around 15,000 people.
As the event continues to grow, so does the school. On March 10, the school held a grand opening ceremony for its new building. Where there was originally an asphalt slab used for play, now stands an incredibly efficient building with green technology. According to the school’s Executive Director Linda Roth, the new building was added to enhance the educational experience. She explained that they have room for additional students, instead they wanted to “provide more learning space for the students we have.” The building will serve three main purposes: there is a music lab complete with a Yamaha keyboard system, a STEM (Science, Technology, Engineering, and Math) lab for experimentation and other hands-on activities, and a community space. “The thing we do best is experiential education. Our teachers are really creative. We needed a bigger space to perform and set up experiments,” Roth said. “Providing a space where they can explore is really a gift for them.” The new space will allow more room for activities and presentations and will also give the faculty, staff and students a meeting place. “Considering it’s Community School,” Roth said, “we didn’t really have a place we could all get together.”
Like the festival, the school has come a long way. Community School opened in 1971 in an old country club building at Green Hill Park in Salem. According to Stratton, it was founded by a group of parents and educators who weren’t satisfied with the educational options in Roanoke. The school was created on the idea that kids learn best through experience and also places an emphasis on integrating the arts into the curriculum. “We give them a joy of learning and teach them how to teach themselves,” Stratton said. “We believe that the child should be very involved in their own education.”
Roth said when the school started there were only a handful of students and they were all taught in one classroom regardless of age. They quickly realized that this needed to be adjusted, but still somewhat stuck with the philosophy. Community School does not have grade levels, but instead, levels that incorporate age ranges. That way, students aren’t forced to move on to the next grade if they are not ready. An advanced student in the group may then become a role model for the others. The older kids also have buddies in the younger grades, whom they interact with on a regular basis.
At Community School, children are at the center of their education. The child runs their own conferences, chooses work to show their parents and sets their own personal goals for improvement. Since the school was founded on the idea that kids learn through experience, this is a major factor in the curriculum. “Children innately want to learn and are curious. If provided with the opportunity, they will take advantage of it,” Roth said. Because of this, students are often asked to take part in simulations where they are placed in a situation similar to that which they are studying. For example, Stratton remembers an Ellis Island simulation for which her daughter had to reenact the role of a young female from the Ukraine. She had to research, dress up and simulate a variety of situations. The teachers also work together so that, for example, if students are studying Ancient Greece, they can incorporate this into their music and art classes as well.“It really helps them understand the subject they are studying,” Stratton said. “We give them a joy of learning and teach them how to teach themselves.”

Another major philosophy at the school deals with student behavior. “When kids come to Community School, nobody is going to make fun of them,” Stratton said. “Bullying is not allowed.” She explained that this is enforced by the students not the teachers and that the kids simply don’t accept it. “We teach that everybody is different and there is something you can find to like about every person.”