Does Your Child Have Sleep Apnea? 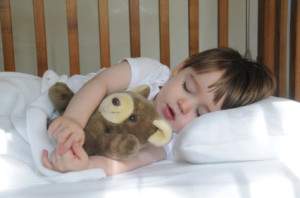 As parents, we are often quick to call our pediatrician when our child has symptoms such as a high fever, rash, vomiting, or seizures.  But what about snoring?  It is another important symptom that your child’s doctor should know about, although it often goes unreported.  However, snoring can often be a sign that a child is suffering from a condition known as obstructive sleep apnea or OSA.  Generally, unless they are recovering from a cold or allergies, children should not snore. Period.

Obstructive sleep apnea is characterized by prolonged partial blocking, or intermittent blocking, of breathing during sleep.  Enlarged tonsils and adenoids are usually the main cause of sleep apnea in children.  According to the American Academy of Pediatrics, sleep apnea is a common problem that affects an estimated 2% of all children, primarily between the ages of 2-6, although it can occur at any age.   It can be very disruptive to a child’s sleep, causing them to not get enough restorative rest at night and leaving them to feel tired during the day.

Some other common symptoms in children with sleep apnea include:

Surgical removal of the adenoids and tonsils is the most common treatment for children with OSA.  If left untreated or undiagnosed, sleep apnea can lead to a variety of problems, including behavior, learning, and health problems.  According to the National Sleep Foundation, ADHD can be linked to various sleep problems in children.  Researchers even suggest that some children who have undiagnosed sleep disorders, such as obstructive sleep apnea, have been misdiagnosed with ADHD, due to the common symptoms these conditions often share.

If your child exhibits any of these possible signs of sleep apnea, consult your pediatrician and/or a pediatric ear, nose and throat spet for a thorough evaluation, diagnosis and treatment plan.  It’s a good idea to record your child’s snoring or unusual nighttime noises so you can share it with the doctor during your appointment.

Generally speaking, most sleep problems parents face with their children tend to be behavioral in nature.  The good news about that is it more than likely means you can change your child’s sleep patterns for the better, given a good sleep plan and a big dose of consistency.  However, some sleep issues can be caused by an underlying medical issue, such as allergies, reflux, eczema and sleep apnea.  It is important to rule out or effectively treat an underlying medical condition before deciding to sleep train your child.  Even if your child has a mild medical condition, behavioral modification, regardless of which sleep training method you prefer, will only get you so far.  For instance, you may be able to effectively teach your child how to soothe themselves to sleep at nap or bedtime, but you may have a hard time eliminating your child’s frequent wake ups since it is a physical condition that is disrupting his sleep. Therefore, consulting your pediatrician or spet if you suspect an underlying medical condition to be the culprit should be the first step you take in attempting to solve your child’s sleep disturbances.  However, in many cases, there will still be behavioral issues to address regarding your child’s sleep issues once you’ve ruled out or addressed any possible medical causes.  Working with a professional sleep coach to help you create a sleep plan that best suits your child’s temperament, development and needs, as well as your own parenting styles, can help you address your child’s behavioral sleep issues effectively.

I recently worked with a family who, at the time, had a 4 year old daughter who was having a hard time settling down and soothing herself to sleep at bedtime, was experiencing several wake ups during the night and was waking up too early in the morning.  Their child was also having some occasional behavior issues at daycare.  Exhausted and desperate for a change, but wanting to avoid having to let their child “cry-it-out”, they came to me for a solution. After a thorough review of their history form and talking more with the parents, it was clear to me that part of their daughter’s sleep problems were behavioral and could be addressed through implementing a customized, gentle sleep training plan.  However, based on some key indicators and symptoms they’d shared with me during our consultation, I suspected that their daughter’s sleep issues were possibly being impacted by an underlying medical condition, such as sleep apnea. For example, the mother described her daughter’s snoring to be so loud that they could hear it from another room down the hall!   Prior to contacting me, they had shared their concern about their daughter’s snoring with their family doctor at the time.  A home sleep study was suggested to help determine if she had a possible sleep disorder.  The results came back negative, although the parents questioned the accuracy of the test and were actively seeking a second opinion when they contacted me.

While the family pursued a second medical opinion, I was able to provide them with a sleep plan that focused on improving the behavioral aspects of their daughter’s sleep issues.  By implementing a predictable bedtime routine, making slight adjustments to her daily schedule and helping the parents find a consistent and effective way to respond, they began seeing noticeable improvement within a few weeks.  Meanwhile, they ended up switching to a new pediatrician, who quickly confirmed that their daughter’s tonsils were quite enlarged and referred them on to a local ENT spet.  She ended up having surgery to have her tonsils removed and after her recovery, the parents happily reported that she no longer snored and was sleeping well every night.  The combination of implementing an effective sleep plan and having her medical issue addressed appropriately is what led them to be able to successfully help their child get the rest she desperately needed.

“Our daughter was a great sleeper from birth to 18 months of age.  Basically, all we did was read a book, kiss her good night and hit the light switch.  However, 18 months was a real turning point.  She held on to strep for most of the winter, developed croup, and began to snore.  Although she eventually recovered from her illnesses, the snoring is something that lingered and the struggles we faced in getting her to sleep well got worse.  Our daughter’s sleep habits went from getting a regular 10-11 hours of sleep at night, to around seven hours, if we were lucky.  We all dreaded night time.  Her bedtime routine became less predictable, and we quickly found ourselves relying on habits we did not intend to create.  At times, it would take over two hours just to get her to fall asleep.  We knew we needed to get our family back on track.  That’s where Erin stepped in.  She helped us sort out our problems with the nighttime rituals, she listened to us talk about our difficulties, and complain about our sleepless nights, but most importantly, she helped us implement a consistent and effective plan to improve our daughter’s sleep habits.  In a matter of a couple of weeks, her sleep issues began to change for the good.  But, we knew we still had the medical piece to deal with in regards to her snoring.  Our daughter ended up having her tonsils and adenoids removed, which we welcomed after all we had been through.  We have a different kiddo now.  We had terrible, sleepless nights for over two years.  We thought that was our new normal.  But after addressing her sleep issues, both behaviorally and medically, we can say that those days-and nights- are in the past.” ~Kate, mother of 4 year old

Erin Anderson, The Sleepytime Teacher, is a certified Gentle Sleep Coach based in the New River Valley.  She helps families with children, newborns to age 6, create and implement customized, gentle sleep solutions-without having to let their child “cry-it out”.  She offers in-home consultations for families in the local and surrounding areas and can work with families by phone or Skype elsewhere.  If you’d like to learn more about the sleep coaching services Erin offers or to contact her to schedule a FREE 15 minute phone consultation to discuss the sleep challenges you’re currently facing with your child, visit her website: www.sleepytimeteacher.com

*Please note sleep science does not support sleep training your child before 4 months of age.  Attempting to implement independent sleep skills too early can lead to negative outcomes and lots of frustration for you and your baby. The ideal time to try any type of sleep training method is 6 months or older.  At this time, your baby will likely be developmentally ready to learn independent sleep skills and you will have more long-term success. It is best to get your doctor’s approval before beginning any form of sleep training.