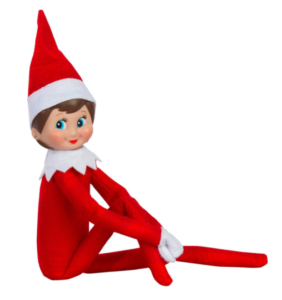 I’ll admit it. I’m gullible. I fell for the Elf on a Shelf craze.

The premise: The elf — we named him Sparky — sits on a shelf and watches my boys from the moment they wake until they fall to sleep. Each night, Sparky flies off to the North Pole to reports all the nice and naughty things the kids did throughout the day. Sparky returns to our home every morning and parks his cute elf-self in a different spot. The kids shoot out of bed like they are shot out of a cannon to look for the pesky elf. What fun has he gotten himself into now?! Is he in the sugar bowl? Wrapping presents? Eating the candy canes? Oh, you silly elf! You are such fun!

This is going to be awesome and magical, and the kids will tell stories about Sparky to their kids and grandkids, I told my husband. “We’ll make memories!” I gushed.

“Oh we’ll make memories,” he replied. “But I don’t think we’re talking about the same kind of memories.”

This reality: I was three days into the program before I swore Sparky was an international spy watching for my worst parenting moments. Not only was I supposed to move Sparky every night, but I had to find something for him to do! And unless he was willing to scrub my kitchen floor or clean the boys’ bathroom, I was out of ideas.

Sparky didn’t move for a week. At first, I told the boys he was happy in his spot and didn’t want to move. Then, I told them that Sparky wasn’t feeling well and needed a few days off. A few days later, our youngest, asked if Sparky was dead. I moved him that night and included a note. “I’m so sorry I didn’t move from my spot,” he wrote. “Instead of going to the North Pole every night, I’ve been going on dates with the Tooth Fairy! I promise to do better!” The boys, bless their hearts, bought it. Like every good mother, I promised to do better.

Sparky moved the next two nights. Then he sat for another week, not moving, not going to the North Pole. Every morning, a panic pulsed through me. Sparky! I forgot to move Sparky!

I don’t panic when I send my kid to school wearing two separate shoes. The fact that I was panicking over Sparky meant that maybe — just maybe — this elf-on-the-shelf thing was too much for me.

I gave up. Sparky went back in his box and put out of sight.

He left a note for the boys. “Santa called me back to the North Pole for the rest of the Christmas season,” the note read. “He says that you’re on the Nice List and will receive a lot of presents this year!”

Thankfully, Sparky didn’t tell the boys that their mother is a dingbat and fails miserably at cute-and-fun holiday traditions.

Peg McGuire lives in Roanoke with her patient husband, Joe. Timothy and Charlie are their boys. For unknown reasons, they refuse to wear pants. Peg blogs at CrankyPantsCaravan.com.

I'm Peg McGuire. My ever-so-patient husband is Joe. I married him because he's cute and kind and a really good kisser. He can also balance a check book and does not admonish me when I call him at the office to ask "have you seen my keys?" Our kids are Timothy and Charlie. They are adopted and we love them all the time no matter what. Our dog is Mitzy The Wonder Pup. She thinks that Charlie is a chew toy. We're working on that. I don't think we have a cat, fish, bird, ferret or hamster. I haven't cleaned my house in a while and one of the boys may have snuck one in. I'm one of those "mid-life" mothers. While my girlfriends from high school are bragging about their grandbabies, I'm pleading with my five-year-old to, for the love of God, wear pants when he leaves the house. http://www.crankypantscaravan.com/
Share This: