Genrerational Generosity: Bricks for the Brave 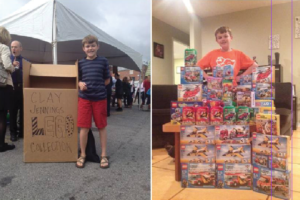 How did you come up with the idea?

When I was in elementary school, I overheard my mom (a teacher) talking about one of her former students’ son who had been diagnosed with cancer a few months before. I followed his story for months on Facebook. Sadly, he did not win his fight. But, during this process I learned that he loved LEGOs like I did. That’s how I learned about Bricks 4 the Brave. He was in UVA, and at that time, they were delivering LEGOs there. For my birthday in 5th grade, I had my friends bring LEGOs instead of gifts for me that we delivered to Bricks 4 the Brave, and they were sent to UVA. Shortly after that, I talked with my parents about starting this project in this area, working with a local hospital. My parents contacted the organization in Colorado and we were told what to do. We needed a Children’s Hospital to work with. Because we have Carilion Children’s Hospital so close, this was a perfect fit. We were connected with Sarah, a Child Life Spet. The process took longer than I wanted, but finally, it happened. We began collecting LEGOs in the fall of 2013. I made my first delivery that Christmas to Carilion Children’s Hospital in Roanoke.

How is your involvement gratifying for you?

I love knowing that the children are being helped through this process. It is also gratifying to that these children are receiving the gifts anonymously. I would love to meet the kids, but I don’t want to take credit for what I do. God is the one who provided this opportunity to me.

Who has helped you get the charity started?

My parents have been the biggest help with this by just getting me started. There have been community groups that I have made presentations to that have helped as well. My church, Blacksburg United Methodist Church, gave me the opportunity for my first donation event. I’ve presented the project to the Blacksburg Junior Women’s Club and Good Shepherd Baptist Church. I have had a booth at Steppin’ Out in Blacksburg the last two years and one at the Eastern Montgomery High School Spring Fling last year. Nest Realty did an awesome promotion for the project, as well. Others that have contributed are the kid’s program at Blacksburg Country Club and lots of family and friends.

How can people donate & help?

We accept new sets of LEGOs (not too big) or gift cards to places I can purchase LEGOs. If they would like to make a donation, please e-mail me to work out the logistics. bricks4thebrave@comcast.net. And, help spread the word! Maybe have a birthday party or gathering where gifts are LEGOs that can be donated to this cause. 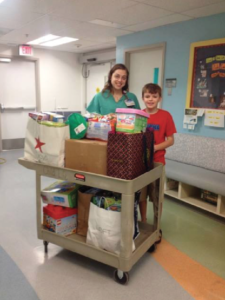