Catherine and Robin Medovich’s son, Nicholas, is 28 years old and has an apartment in downtown Roanoke. That doesn’t sound too out-of-the-ordinary until you know one other detail about Nicholas: he’s autistic.

Catherine, Robin, and Nicholas are the St. Vincent’s Home (SVH Services) Ambassador Family this year, representing and speaking out for the plethora of fantastic services SVH provides for adults with disabilities.

In most cases, Catherine explained, when a child becomes an adult, his parents celebrate him leaving the nest. “The typical journey can often include a college graduation, the first apartment, the first job, and meeting a significant other,” she said. Despite that fact that a grown child’s parents are always her parents, in most cases, they have the ability to truly let go and let her fly from the nest.

Catherine said that “conversely, when an individual with a disability ages out of the public educational system's entitlement (free appropriate public education through age 22 in Virginia), it's time for the parent to re-invent the wheel and start advocating from square one.” This includes things like forming new relationships with different service providers, looking for possible vocational paths, and identifying appropriate social avenues, with the hopes of continued skill acquisition. It’s a much different picture.

“It takes patience, determination, and frankly, a lot of pure luck (to already be plugged in to the funding sources for all of the necessary elements),” she said. It’s pretty rare to be able to actually let go.

“But we have!” Catherine said. “We are only able to let go with the support of our ‘dream team’ — the meticulously detailed, intuitive, compassionate and skilled staff from SVH Services who consistently have Nicholas' back.”

Their family moved to Virginia seven years ago, just as Nicholas aged out of the educational system in New Jersey. “We chose to move to the Roanoke area for a multitude of reasons, including extended family nearby,” she said. And although she lives in Moneta, Nicholas lives in his downtown apartment with SVH’s help, where he has access to public transportation and plenty of activities.

Support from SVH is possible for Nicholas because he’s a recipient of a Medicaid waiver called the BI, or the Building Independence waiver. The purpose of that waiver is to provide support for adults with a developmental disability in the community rather than in a care facility. The waiver funds several services, three of which are provided by the amazing staff at SVH Services: Individual supported employment, home-based support, and community engagement.

When it comes to supported employment, “a job coach makes sure that Nicholas' job is being done appropriately, and any elements or situations at work that aren't understood are explained to him,” said Catherine. “It helps him with skill acquisition and helps him become successful in his place of employment.”

In their home-based support, SVH assesses the elements and skills needed to live independently, and then those things are strategically planned for adults like Nicholas, who are living on their own. This includes meal-planning, housecleaning, and overall apartment maintenance.

“Community engagement is probably the biggest game-changer for an adult with a disability,” Catherine said, “since social isolation [for them] is so prevalent.” The SVH community engagement staff facilitates social skills, social opportunities, and ensures that Nicholas is making the most of living downtown.

Catherine (who herself is a business specialist with SVH Services) said, “I can tell you from years of experience in the disability field that finding this superior level of service for adults with disabilities is not easily found or obtained. So we are truly blessed.”

The upcoming Run for Donuts 5k is SVH’s big annual fundraiser, providing a bulk of the money needed to run services like those Nicholas receives. If you haven’t signed up to run or walk, register now! Not only will you get to help an amazing local cause, you’ll get to take in the awesome scenery at Sherwood Memorial Park in Salem, get in your cardio, and, of course, eat donuts! There will also be a costume contest, so come out in something donut-themed and win! The Run for Donuts 5k and fun run are Saturday, November 2. 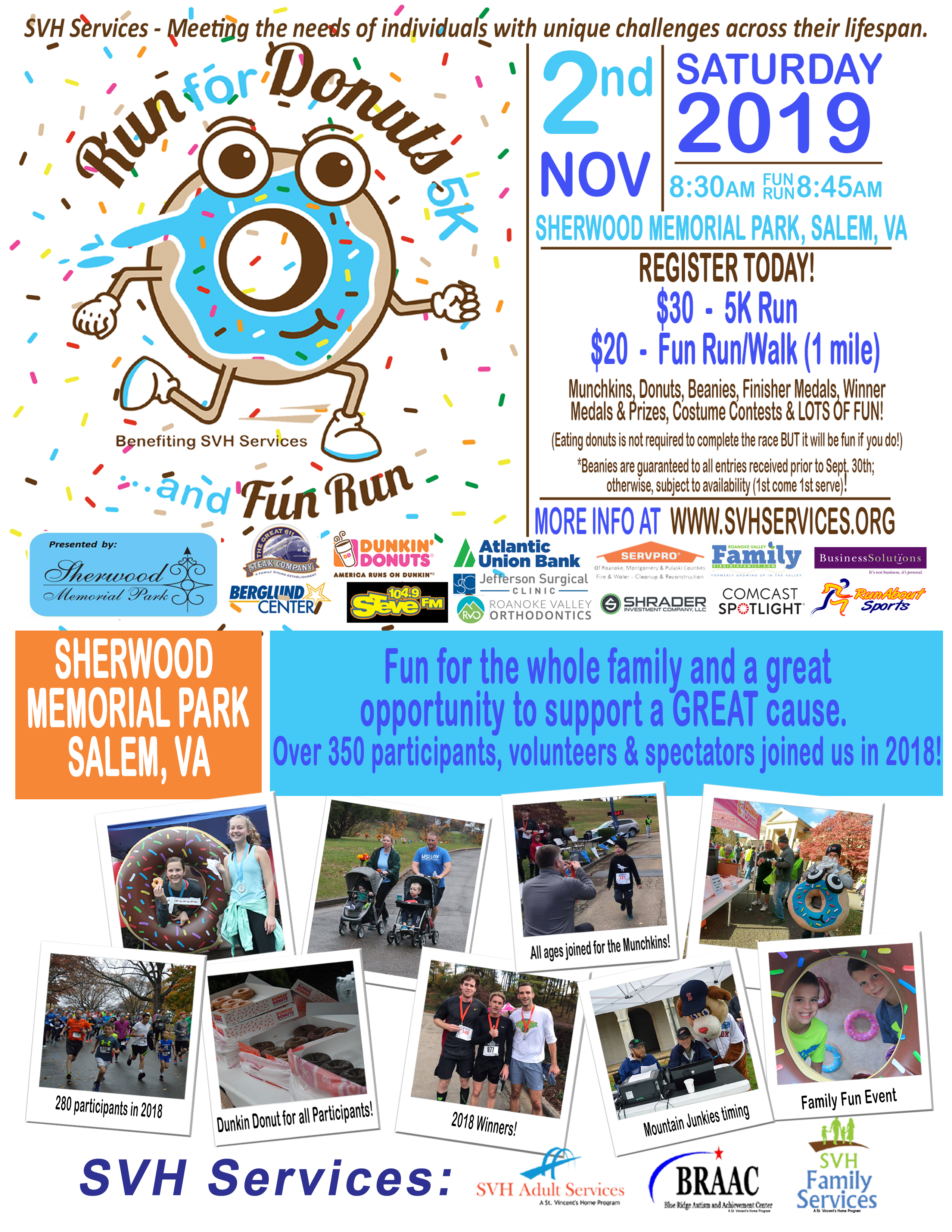