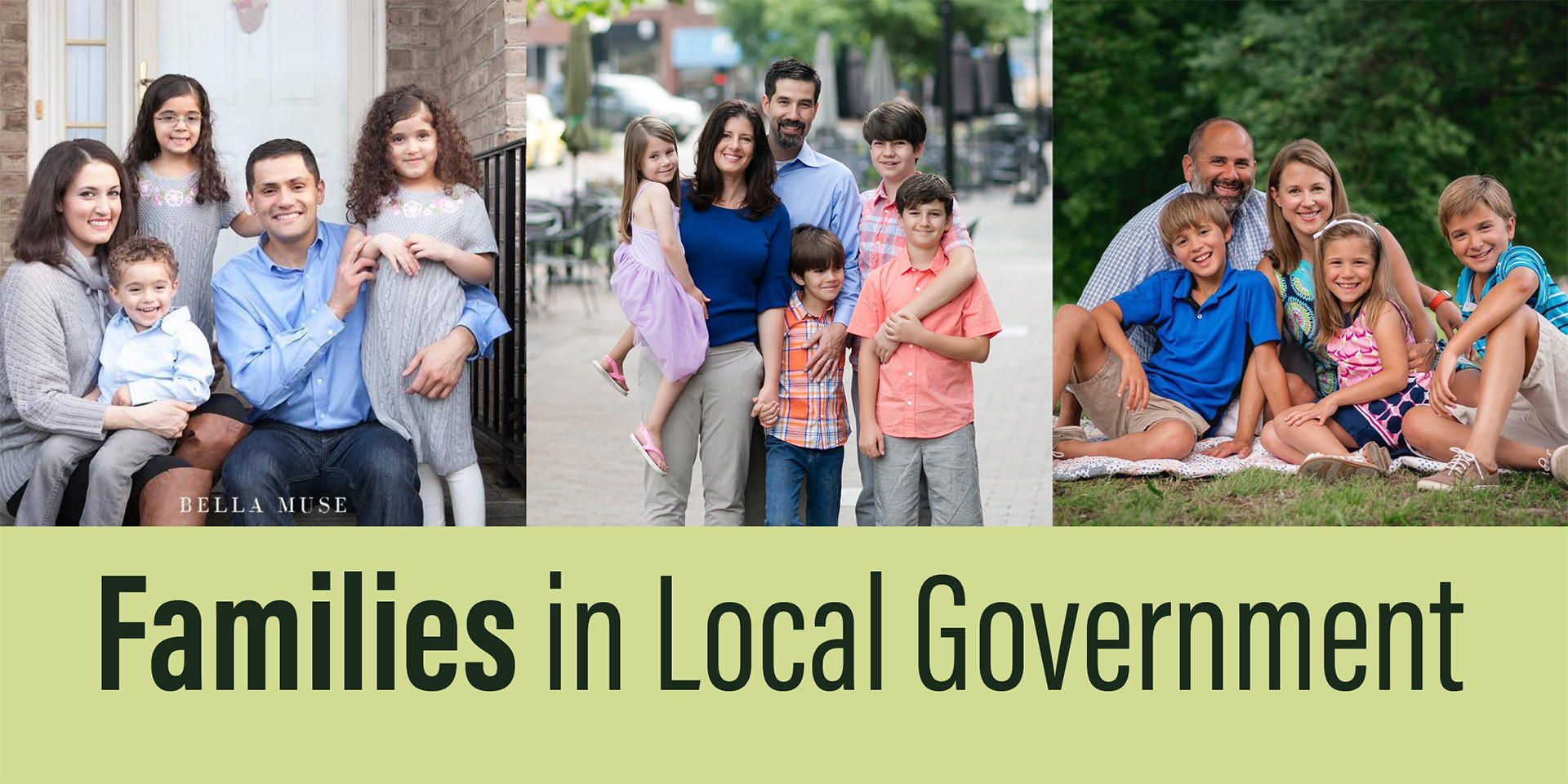 Politicians. Republicans. Democrats. Independents. Policies. Elections. These are all words we are used to hearing because politics are all over the news nowadays. Many see involvement in government as overarching and more of a “big picture” position; however, many of the local government roles involve the officials to be in direct contact with their constituents consistently. Allowing them to become truly connected further with their communities and neighbors. However, what we sometimes forget is that those in elected positions are humans too. They have families, careers, and hobbies, too. We spoke with three local government representatives to get an inside look into how they became involved, their support systems and, of course, their families!

We are all inspired by something, or someone, to take action in any particular area of our lives. Many times, betterment of one’s community can serve as a reason to become involved in local government.

For Councilwoman Colliver, “It was the results of the November 2016 election that drove me to research what government roles were up for election in the coming months.” As a mother to 4 young children, and a small business owner {of 2 businesses!}, Colliver begun to seek out ways to help her community in anticipation of changes that she thought may be coming. “I wanted to see how I could help change the conversation,” Colliver stated.

Delegate Habeeb’s interest in government began early in life, his mother was a U.S. history and government teacher and they frequented many historical sites in Virginia including Jamestown and Williamsburg. His interest continued into high school, too. “I was elected the youth governor for the YMCA’s Model General Assembly in high school which was a unique experience,” said Habeeb. This gave him an inside look into the interworking of government.  Ultimately, this interest turned into election goals in 2010. “I received so much encouragement from others to run after Morgan Griffith was elected to the U.S. House of Representatives,” Habeed stated. “I saw it as a good way to impact the community that I work and live in, education for my children and the economy for my workplace.”

Delegate Rasoul’s path to local government service began with a desire to improve. “I’m not proud of what we see in the political environment, it’s not what I want to be raising my children in,” Rasoul indicated. He stated a desire to offer something different to the community than the two standard parties offered. Now that he has been in elected office he said, “I can now see how public policy directly impacts Virginia families and I have a greater appreciation for my ability to be involved.” This serves has further drive to stay involved within the local government arena.

All representatives need support. Financial support to run election campaigns, employer support for crazy schedules and family support to help boost their aspirations and goals, support comes in all forms.

Colliver explains her support system as her family, of course, but also a group of women from a program called Emerge Virginia. Emerge Virginia is a non-profit that gives women the training and tools to run for and serve in public office. “I was accepted into the Emerge Virginia program in 2017 and decided to run for Town Council in Blacksburg,” Colliver detailed.

Habeeb echoes Colliver’s statement about family support, “My family is so supportive and completely involved in this journey with me.” As a lawyer, Habeeb said he is grateful that his employer is supportive of his journey in local government and his line of work offers flexibility in scheduling.

“It’s almost a requirement that your family is on board,” Rasoul emphasized.
He added, “my wife [Layaly] likes to say that she’s my number one campaigner.” Rasoul stressed that it truly takes the whole family to be involved, time and energy, because your life becomes public.

All of the hard work becomes worth it once a candidate is successfully elected. Once the campaigning is over and all of the meetings, sessions and balancing begins. Many elected officials, local, regional and national, have young families at home. So we asked ours how their life changes after the election.

When Colliver was asked how she balances work, political duties and family she said, “I just do.” That attitude is what helps her manage both Valley Sport and Spine Clinic and Valley Active, Town Council duties, along with the busy schedules of her four children. “It’s been great because I already have connections within the community between the kid’s activities and our businesses, but my role in Town Council has helped solidify those relationships and build new ones,” Colliver adds. She also encourages her children to be involved, from door knocking to attending events with her, “there is something really awesome about having the kids involved in the process; I learned, and it is my hope that they have learned, that you don’t have to limit yourself to what you can accomplish,” Colliver expressed.

“It’s an everyday struggle, it’s not something you can just “figure out”,” stated Delegate Habeeb. He is diligent in his scheduling to make sure he is a present dad, effective employee and faithful public servant.  “We are always making sure calendars are aligned to ensure that I can be at everything possible,” Habeeb added. Habeeb also makes sure that while he is meeting his obligations, that he and his family know that “the center of our lives is not my political service, our family is the center of our lives.” Even when Habeeb is in Richmond during session, he involves his family. “My (then) twelve-year-old (Daniel) has traveled with me to Richmond and got to see how everything works and attend sessions with me,” Habeeb expressed. He has also included his 11-year-old (William) in sessions, too. Habeeb also uses FaceTime to keep in touch while he is away, “my daughter (Anna) FaceTimed me during a budget debate and the Richmond Times-Dispatch got a photo of it,” Habeeb stated with a laugh.

Delegate Rasoul said without a doubt that, “My priorities are family first, public service second and then my business.” Along with his public service, Rasoul serves as a business consultant providing executive coaching and strategic planning services. “I make lot less money in public service that in my previous careers, but I feel as if I’m making more of an impact on my community,” Rasoul emphasized.  Rasoul made a good point when he said, “The family becomes part of your political life because it’s an open book. Before social media, you could have your personal life and political life separate, but now we are so interconnected.” We can all agree that this is very true; many of us follow our local representatives on Facebook and see them out in the community with their families. This also emphasizes the humanity of those in political service. Rasoul agreed, “People want to see all sides of a person’s life, people appreciate being able to relate and see all sides.”

While all of our representatives are dealing with packed schedules, trying to be everywhere all the time, we asked what would be the ideal day with just their family.

Councilwoman Colliver said her family loves to be outside enjoying nature. “We love to hike and explore natural places, we would probably have a cookout with friends.”

Habeeb responded with something we can all relate to: “We would do nothing! We would enjoy relaxing with each other.” He added, “Our kids are involved in many things including sports, music lessons and more, so it would be just nice to sit on a beach and enjoy time with each other.”

“My kids love to ride bikes and they love ice cream, we would probably go bike riding to get ice cream,” said Delegate Rasoul. He also expressed his family’s love of activities downtown such as Kid’s Square and the Taubman Museum, too.

While they are helping communities build, grow and evolve, our representatives are also raising the future generation in their children. We asked if they would encourage their children to go into political service for their communities, and their responses were insightful and heartwarming.

Councilwoman Colliver said, “absolutely, there is so much to learn, to be a voice for your community, it’s a huge growing experience and an honor.”

“I would encourage them to do whatever they are passionate about,” said Delegate Habeeb. He did mention that his oldest son, Daniel, has expressed interest in politics and would like to be a page for the State House or Senate in Richmond. Habeed expanded further, “I would not discourage them from doing it [public service] but I want them to do it because they want to, not because Dad did it.”

Delegate Rasoul shared Habeeb’s statement, “I would encourage my children to give everything they have to what they are passionate about, and that is all I ever ask of them. I will let them decide that that may be, let them discover.”

Our elected representatives are tasked with making difficult decisions and addressing the most effective ways to improve our community on a local and regional level. They balance all of this with careers and families at home. That is something we should all take a moment to remember and celebrate.